I’ve explained in earlier posts how to simulate a simple overdrive circuit. I’ve also explained how I implemented this in QtVST (and yes, I should have added labels on those images!), which was more or less the predecessor of Audio TK.

The main problem with simulating non linear circuits is that it costs a lot. Let’s see if I can improve the timings a little bit.

The state at version 0.1

In Audio Toolkit 0.1, I’ve implemented the same version than what is available in the QtVST plugin. Let’s check on Valgrind with a 32x oversampling what actually costs the most:

Knowing how the Newton Raphson algorithm works, y0 is actually constant for during each optimization, and then y0 will be the old y1, the old state. At the beginning of each iteration, y0 will be equal to y1, and I tried this solution. It was worth the cost, as the Valgrind was almost the same (or worse).

Can we do better?

So the situation is better, but not yet ideal. The performance improved by 10% (more or less), but the exp function is still using one third of the computation time. One way of improving the situation is to use an approximation of the exponential function. The first thing to do is to know the range on which the function will be needed. The diode maximum voltage is about 0.6V, meaning that the exponent goes from -26 to +26 (taking Vt into account).

Then, I tried two options to approximate the exponent function: Taylor expansion and the Pade approximants. Here are the two functions written in Python, using Horner’s method:

Another solution was to try the Taylor expansion with a handful coefficients, but instead of going up to 26, I went to 26/16, and then multiplied the exponential result by itself several times. But it wasn’t enough to make a difference, the timings were just a little bit above the current one I had with the exponential function. So I’m staying with it for the moment.

Still, if you want to test an approximation of the exponential function, you should only use positive values, and if you have negative exponents, inverse the result of the positive value instead: it is less prone to oscillations.

Which oversampling to choose?

Obviously, the only remaining solution I have it diminishing the oversampling. But then, the solution quality may decrease. So what is the difference? 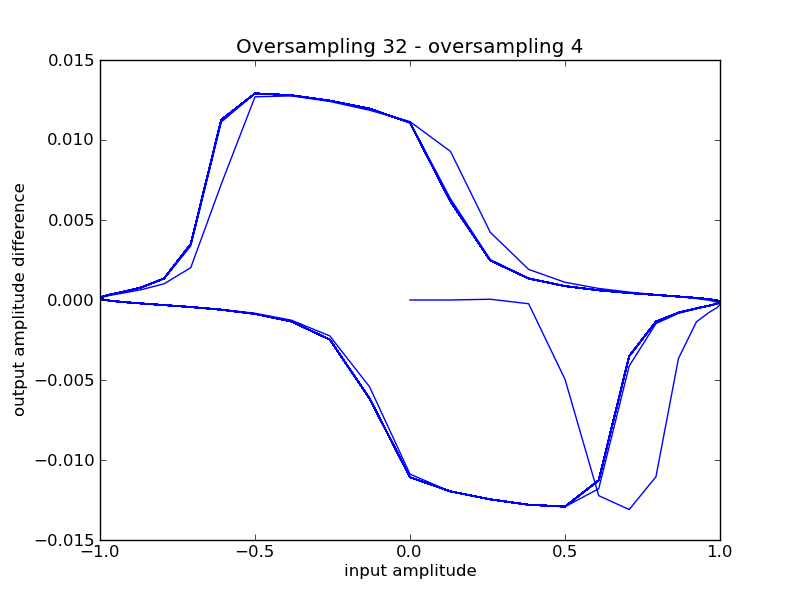 As the 32x oversampling should have the least aliasing, I used it as a reference for the others. Adding one level of oversampling decreases the error by almost one level of magnitude, which is good. But if you consider than less than 1% error is enough, a oversampling of 4x may be what you are looking for for a 1kHz signal. Don’t forget that the higher the frequencies in the original signal, the more aliasing content you will get.

Yes, we can do better than the plain Newton Raphson optimization by caching values. Using an exponential approximation doesn’t seem to be efficient enough, even with the proper multiplication tools, so the only solution left is reducing the quality of the solution. 32x is not perfect, there is still some aliasing effects, as I showed in the QtVST post, but is should be enough for the majority of the signals. 4x might also if you accept a 1% level error.

2 thoughts on “Audio Toolkit: Optimization of the overdrive simulation”