In the last blog post, we saw the individual effect of each stage of the Boss MT2 pedal. But with all these effects impacting each other, what is the final find of spectrum that we get?

Let’s start with the spectrogram of the pedal, with an oversampling of x8 for the non linear sections:

The amplitude response has a reminder of the post distortion tone: shaping stage

We also see there the lasting effect of the band pass before the distortion stage, and these two graphs combined show the complex processing that the pedal does and probably explains why the pedal is so effective.

Adapting the pedal for the bass

I wanted also to adapt the pedal for the bass. One of the reasons is that the MT2 is really a guitar pedal, although the bass works well on it despite the input high pass filter. It still creates too many high frequencies harmonics for my taste, which is why MTB exists as well.

So I decided to move all the cut frequencies down. The high pass filter would cut around 40Hz, the pre distortion tone shaping peak frequency would be lowered, etc. One of the drawbacks is that the amplification on some filters was lower due to the resistors and capacitors used, but I still think that the overwhelm result is interesting: 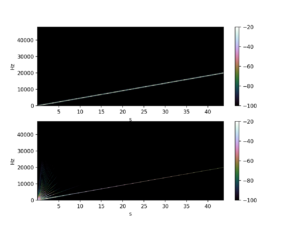 It’s very similar to the MT2 version with a lower bump on the post distortion. I’m very curious about what people will think about this variation!

The characteristic sound of the MT2 is, according to me, due to the combination of so many non linear and linear filters. The bottom end of the spectrum is there, no matter what, and the higher frequencies can be shaped better than with a SD1 or a warm preamplifier.

A dedicated bass version is tough to create because of the very deep lower end of the pedal, but I think MTB does a good job while being less present int he higher frequencies, leaving more space for other instruments.

I will make a small video in the future comparing the sounds of the MT2 with my SD1 as well as the guitar preamp, and I will do the same for the MTB variation and my bass preamp. Stay tuned!